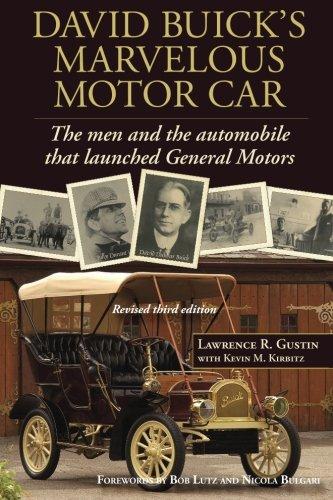 UPDATED AND EXPANDED EDITION Praise for the first edition: “A meticulously researched book written in a popular style that’s difficult to put down. By skillfully weaving together the careers of David Buick and his contemporaries and their car, Larry Gustin fills a gaping hole in automotive history.” —David L. Lewis, professor of business history, University of Michigan “A good, succinct history of the early days of one of America’s great mainstream automo- biles, and the men responsible for it.” —Z. Taylor Vinson, The New York Times “If the question is Buick-related, Larry Gustin has the answer. He’s also an entertaining story teller and accomplished wordsmith.” —Don Sherman, technical editor, Automobile magazine “Gustin is an award-winning author and one of the world’s leading Buick authorities...the ideal person to write this book. He skillfully weaves the eventful story of the man who launched a world-famous automobile marque that became the favorite of royalty, business leaders and movie stars.” —Bill Vance, National Post [Canada] “The phrase, ‘It’s now or never,’ explains the drive behind this work on David Buick. Larry Gustin has studied the person, his work and the characters in the David Buick drama for decades. In this book, he has brought all that research material into sharp focus. The interests of automotive history are well served by this welcomed work.” —Leroy Cole, past president, Society of Automotive Historians “When it comes to writing Buick history, Larry Gustin is one of the luminaries...Gustin wrote the first, and still the best, biography of Billy Durant and followed it by co-authoring a history of Buick that’s now in its sixth edition...it’s an energizing read.” —Jim Donnelly, Hemmings Classic Car magazine “Gustin...traces [David] Buick’s rise and fall in an entertaining, folksy style with new in- sights into the man and his machine.” —Matt DeLorenzo, editor, Road & Track magazine “Larry Gustin has at last brought us the long overdue story of a forgotten automotive pioneer. And he has done it in a manner that only a writer with a lifetime interest in the his- tory of the Buick automobile could ever hope to accomplish. It’s about time.” —Terry B. Dunham, president, The Buick Heritage Alliance “Gustin offers new insights into the largely unknown and often tragic life of David Dunbar Buick, a significant but neglected figure in the early automobile industry of Michigan... This is a ‘must read’ for anyone interested in the early history of Buick, General Motors and Flint, Mich.”